It has been a while since my last blog update, and much has happened.

It takes a lot to get me off Kangaroo Island these days, but I did manage work on three very diverse film projects. The Nightingale would have me collaborating with director Jennifer Kent once again, who I had shot stills for on her phenomenally successful first film The Babadook. Shooting in some stunning  Tasmanian landscapes, the period film, set in 1820’s, featured some incredible performances from its fine cast and I am sure will make for an intense cinematic experience. Closer to home, Storm Boy, the retelling of the 1970’s Australian classic, had me working in the beautiful Coorong region of South Australia.  A crew full of old friends, the stunning coastal landscapes, remarkable trained pelicans and a stunning performance by 12 year old lead actor Finn Little making for a another good film making experience. Completely different in every respect, I Am Robot, shooting in the Adelaide Film Studios, was a futuristic sci fi thriller with incredible sets and starred a very cool robot designed by New Zealand’s WETA group along with US actress Hillary Swank in a leading role. 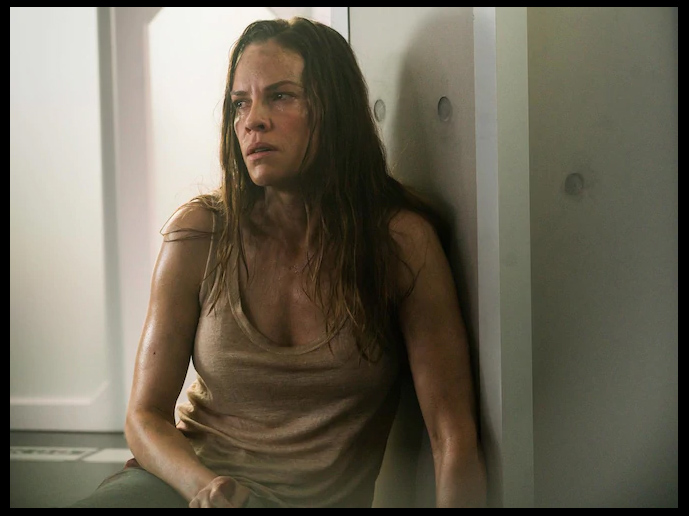 Hillary Swank in I Am Mother.

Practising and teaching yoga has become a central part of my life in my late 40’s. As my teacher experience grows it has become apparent to me that teaching yoga to children is what really lights me up, and challenges me enormously at the same time. In January I returned to Indore, India to undertake my next level of your teacher training. For the second time I lived at Paramanand Institute of Yoga Sciences for a month, undertaking an intense period of study and practice under the wise guidance of my mentor and guru Dr. Omanand, Guruji. 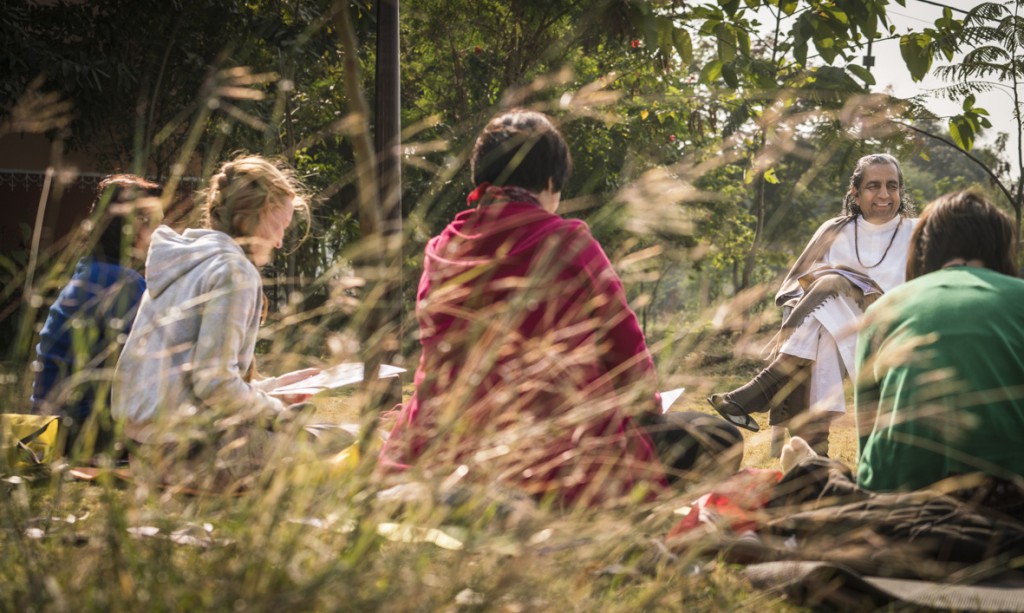 The presence of Dr. Nick Perch at the ashram was an added incentive to go. I had met and connected with Dr. Nick, a Ukrainian medical doctor as well as a  doctor of Yoga, on my initial visit to the ashram. On  top of completing his doctorate on the benefits of yoga for children, a shared passion, we connected deeply on a musical level, enjoying many sublime Bhakti Yoga sessions, devotional singing.

Dr. Nick Perch and I in a Bhakti Yoga moment.

January would prove to be a busy time for our teacher Guruji  as he is much in demand internationally and throughout India as a yoga master and motivational speaker. I was one of a few students who were invited to join him on some of his trips, which were always an unpredictable adventure. This gave me the opportunity to see more of India than o my previous visit. There were epic overcrowded car journeys to  distant cites, overnight trips on freezing sleeper busses to mystery events, a yoga class for 700 hundred police cadets at dawn and joining 7000 kids in breaking the sun salutation work record, 1 million!. Travelling with Guruji felt a bit like travelling with Elvis; adoring fans would overload him  with garlands and fall at his feet in reverence, escorts in and out of the city. As his entourage we students were also given the royal treatment. 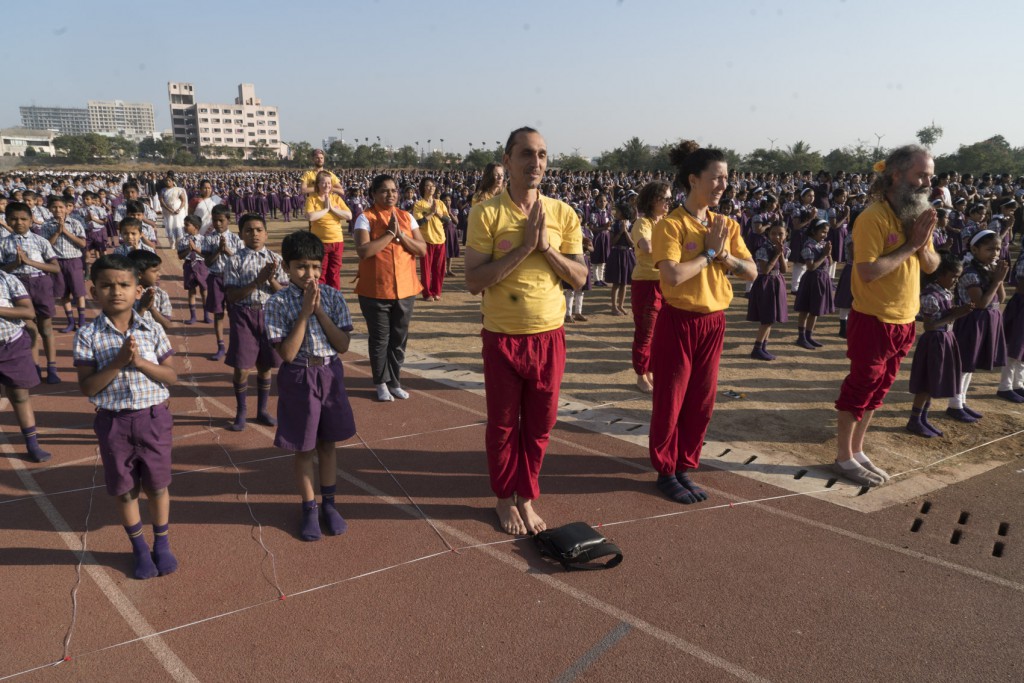 Myself and other Paramanand Yoga students joining 7000 Indian kids for the Sun Salutation world record. 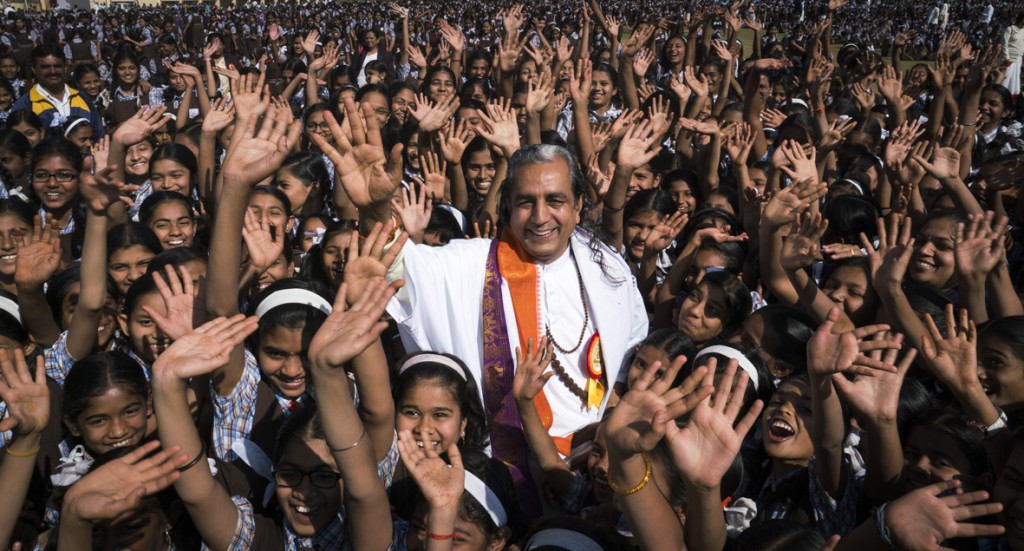 Guruji swamped by adoring Indian kids after their successful completion of the Sun Salutation world record.

Once again, my this period of study was s a deeply transformative, as I qualified with my 300 hour teacher levels and had many amazing experiences. India seems to be reluctant to let me me go. Last time a Visa oversight had forced me to miss my flight and spend a stressful and expensive 24 hours sorting out the mess. This time a sudden bout of food poisoning at the airport tried to prevent me from boarding my flight. Determined to get home I took my seat for what would be possibly the most uncomfortable and humbling 7 hours of my life.

Afternoon yoga class on the lawn at Paramanand Institute in Indore.

My work as a stills photographer was very well represented in an exhibition called Starstruck put together by Australia’s National Portrait Gallery. The exhibition looked at movie set portraits throughout the history of Australian film making. I did several interviews for the show, had one my images used on the poster and book as well as eleven images in the show itself. The exhibition opened in Canberra and travels around the country throughout 2018. 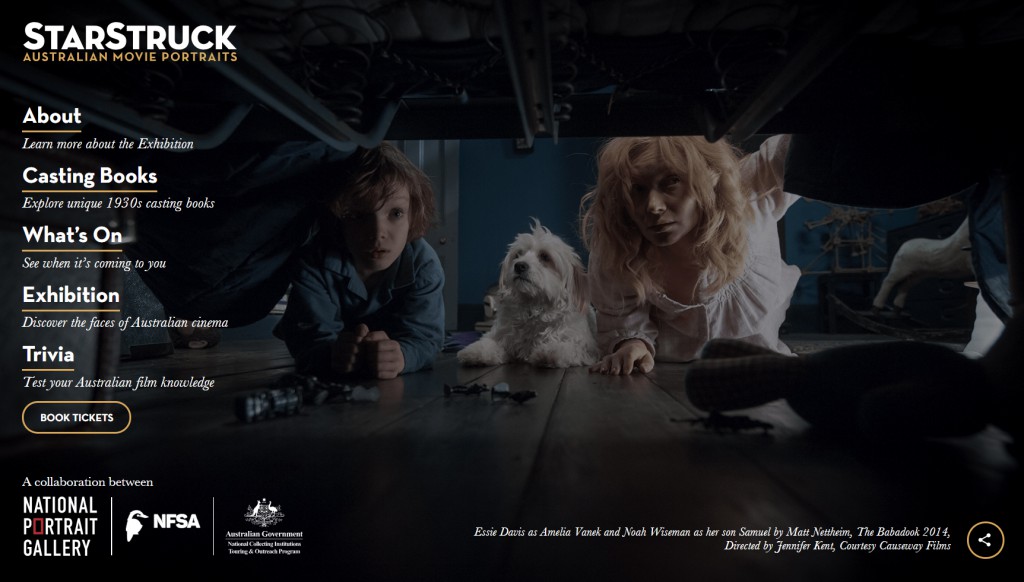 My wonderful father Professor Robert Garth Nettheim died in February, shortly after his 85th birthday. I have always been very proud of my beautiful dad who I loved dearly. A tender and caring father, an interesting, highly intelligent, funny man and an outstanding teacher and activist. Throughout his career as a law professor he was a champion of human rights for indigenous people  and had done some seminal work in forwarding the rights and restoring the land rights of the original Australians.

It had been a long goodbye over a few years, my sister Anna had been outstanding in supporting him in Sydney in his declining health. My regular visits to Sydney to spend time with him had  brought our family closer together and the intense and emotional process of organising his funeral with my siblings was an honour. Many beautiful tributes flowed in from friends, former colleagues and students and from the many people touched by his important work. A lovely obituary was published in The Sydney Morning Herald, the newspaper he had read daily his whole life. 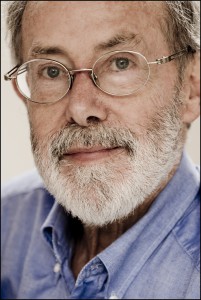 I picked up first prize in the Kangaroo Island Easter Art Competition with a basket weaving dedication to my father. Called The Life of Professor Garth Nettheim, the work marked a departure from my usual baskets and rattles as I explored story telling weaving around the theme of life and death. Starting at his birth, I used photographs and memories to feel into all the different stages of my dads life as the basket grew and evolved, the completed weaving over 5 foot tall. The finished work definitely had a sense of having my Garth’s spirit, a interesting organic shape that seemed to moved of its own accord. 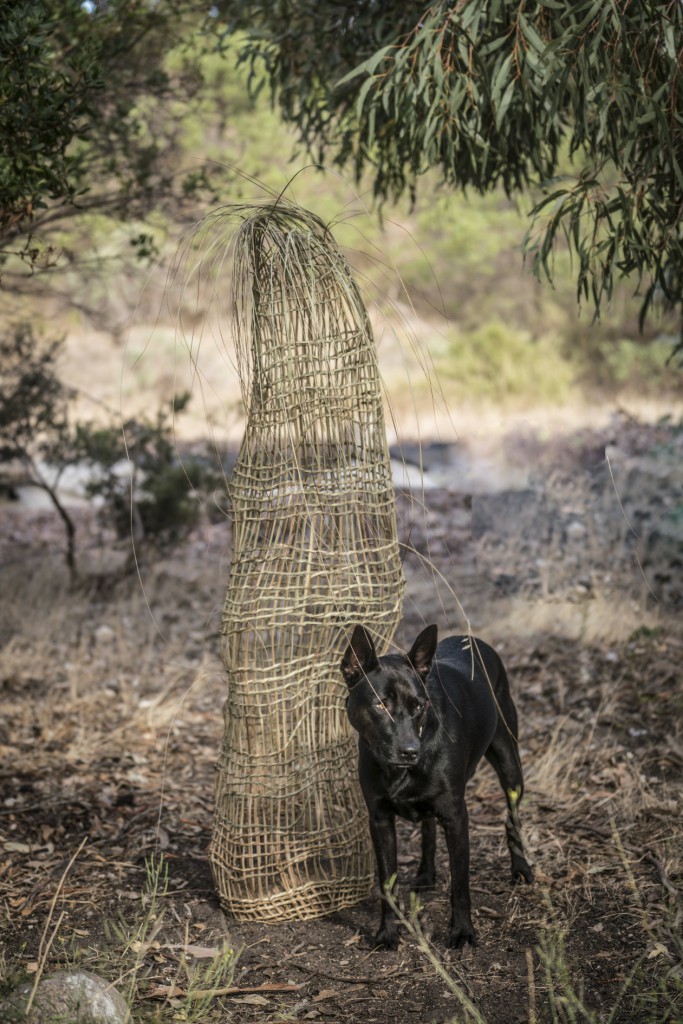 Having travelled and studied in India and cremated my father in Sydney, I settled into a restful period at my beautiful place on Kangaroo Island, a chance to integrate the teachings I had learnt and enjoy my backyard beach in the warmer months. In May, it was great to get asked to teach yoga to the children at 2 of the islands schools and have the  opportunity to practice what I had learnt. Integrating laughing yoga practices as well as traditional Hatha, mediation and pranayama, I am currently teaching the entire school at Penneshaw, including the teachers, and two entire classes at Kingscote.  It has been challenging and fun to design a 8 week course for my students and the early responses and feedback from the kids and teachers has been very positive. It still amazes me to have 80 Australian country kids of all ages sitting in meditation, completely silent for several minutes and then see them float peacefully out the door. It is just such wonderful work. 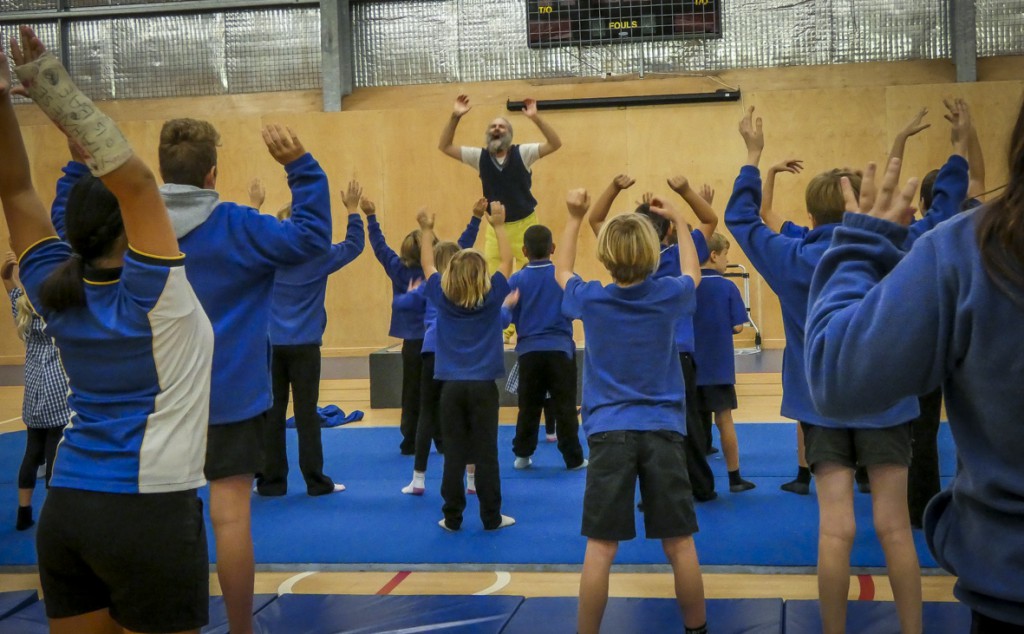